India, the country where the Venue was introduced first 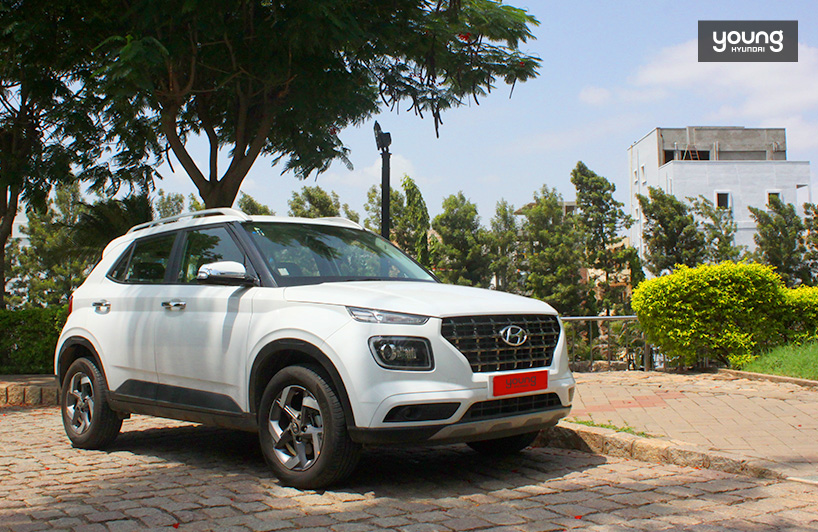 ▲ India is a special place for the Venue.


The Indian automobile market is growing at a tremendous rate due to the country’s rapid economic development and the rising sales of automobiles brought about by having the world’s second largest population. Most of the cars sold in India, an automotive market that has attracted a lot of attention of late, are small vehicles. As such, India was the perfect stage for launching the Venue, a small-sized SUV manufactured by Hyundai. The Venue was launched in India on May 21, two months before its launch in South Korea. We had some questions about the Venue for the members of Team Venue(Hyundia Motor Company), who have been monitoring the brand at close quarters. 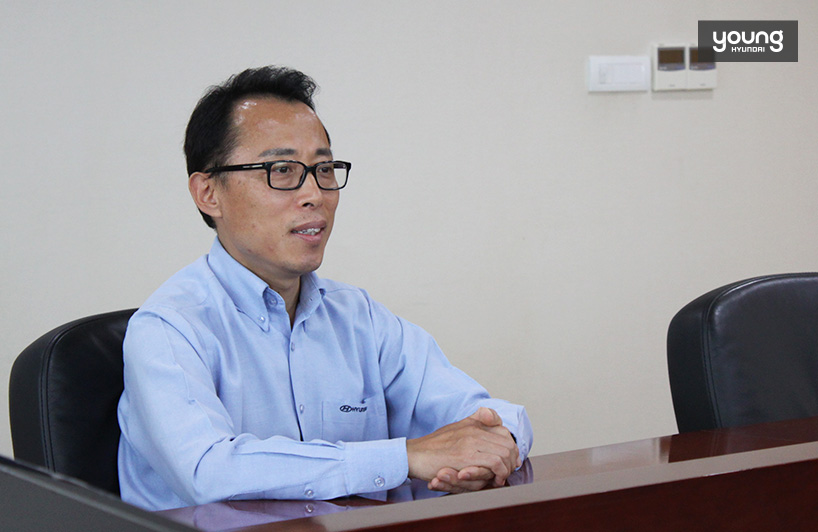 ▲ Director Oh Jeong-seok, the head of the Body Design Team at the Hyundai R&D Center in Hyderabad


The R&D Center in Hyderabad is one of five overseas R&D centers established by Hyundai Motor Company in important geographical locations. In addition to India, the company operates R&D centers in Europe, the United States, Japan and China. This goes to show just how important India is to the company. The Indian R&D Center is responsible for carrying out automobile market research in India and developing strategic models for the Indian market. Santro, the car developed by Hyundai specifically for the Indian market, was born at this center. It is also where the Venue, the latest addition to our product lineup, was streamlined for the Indian market. We met up with Director Oh Jeong-seok, who heads the Body Design Team, to listen to his description of the Indian market and Hyundai Motor Company’s experience in India.

Director Oh Jeong-seok, Body Design Team, Indian R&D Center:
1. Could you tell us some of the reasons behind the Venue’s popularity in India?
Young people in their 20s and 30s account for 63% of all car sales in the Indian car market. They are largely young people entering the workforce who want small and efficient cars. This is why smaller cars are sold in larger numbers than large-sized cars there.
I think the Venue is the perfect small SUV for the Indian market. The car has a bold appearance which appeals to Indian consumers, and it performs well not only on rough, unsurfaced roads but also in urban settings. Indians are concerned with how they are perceived by others, and the Venue stands out due to its bold design, despite being a small car.
In India, car tax incentives mostly target gasoline-powered vehicles with 1,200cc engines or less, diesel-powered vehicles with 1,500cc engines or less, and vehicles no more than 4 meters in length. To meet these requirements, the global model of the Venue features a different engine lineup and vehicle length. When compared to the Korean Venue, the model designed for global markets will measure 3995m (i.e. 4.5cm shorter) and the ground clearance will be set 2.5cm higher. In the case of gasoline engine models, the models sold in the South Korean market have an engine capacity of 1.6L, while in India the engines come in 1.2L, 1.0L Turbo versions. While not available in South Korea, a Venue powered by a 1.4L diesel engine can be purchased in India. Furthermore, slightly different options are offered to Indian consumers in order to better reflect the local market conditions. For example, rear seat air-conditioner vents and armrests were added to accommodate the higher number of passengers who ride in the rear seat. Furthermore, the company was the first automobile maker in India to provide a connected car service.

2. Could you tell us what was the key to achieving the number 2 position in the Indian market? And could you shed some light on the plans for the future?
I believe the key to our success could be summed up as ‘adapting to meet the needs of the local market’. We raised the ground clearance because the road conditions in India are not so good. We also increased the power of the air conditioning unit because of the hot Indian climate. Another localization strategy we adopted consisted in enlarging the interior space because we knew that Indian consumers liked to ride their cars with their whole families. Not only that, but Hyundai Motor Company is known for its excellent styling and superior quality, and its willingness to introduce new technologies. These are just some of the reasons for the brand’s immense popularity in India.
The Indian automobile market is growing continuously. In this market, Hyundai has performed so well that it has become a benchmark for other car manufacturers. We will continue to further develop areas where we have been performing well up to this point and to improve those areas where we have been underperforming, such as fuel efficiency. In addition, we plan to actively reflect the diverse needs of consumers in our cars. 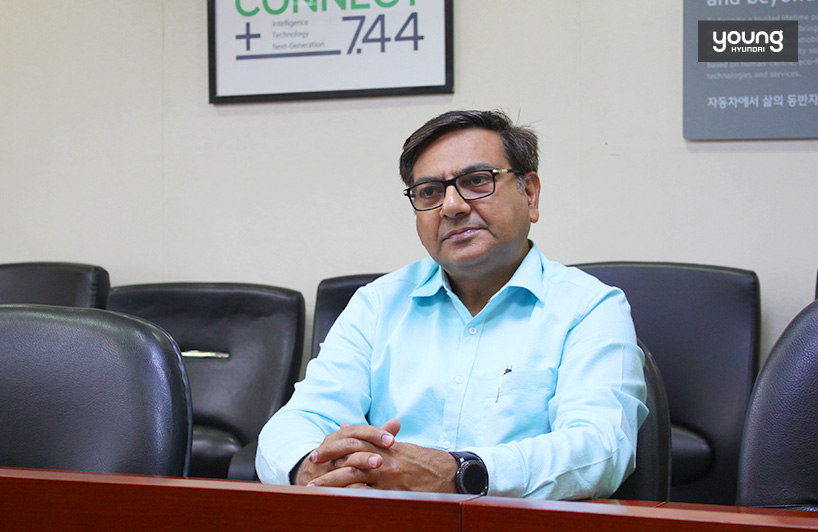 
We have seen how a car is developed after listening to the voices of consumers. The India Region Marketing Team is the unit responsible for advertising a well-made car to the consumers. Because each country has a different culture, historical background, and national character, it needs to implement a marketing strategy that is unique to each country. The India Region Marketing Team focuses on improving the sales of global Venue model in India. When selling the Venue in India, what areas did the team focus more on that it overlooked in other countries? We also asked about the consumer reception of the Venue in India, where it was launched two months before the official launch in South Korea.

Senior Manager Puneet Anand of the India Region Marketing Team
1. What did your team focus on most when launching the Venue in India?
The Venue was developed with millennials in mind. To make them like the car, we armed the Venue with an aggressive design, great safety features, an advanced turbo engine and a 7-speed DCT missions. It is also very reasonably priced. Even with a lot of options, you can buy the Venue at an affordable price.
Just as the slogan ‘Connect to Excitement’ says, the Venue is the first fully connected SUV to be sold by Hyundai in India. India is a country with a huge population of young people. As young people are experts at using mobile phones, we introduced connected technology based on our BlueLink platform. Because of this feature, 55% of consumers who purchased the Venue are using BlueLink.
SUVs like the Venue are a global trend, and the Venue will attract consumers who need a hatchback. Rivals of the Venue include Maruti Suzuki’s Brezza and Mahindra’s XUV300. However, they suffer from poor sales, whereas more than 16,000 units of the Venue were sold within two months of its launch. We predict that the Venue will soon become the top-selling car in its category.

2. What was the reason for launching the Venue in India ahead of other countries?
The United States and India were the two countries that we were most focused on. However, the automobile markets of these countries couldn’t be more different. The U.S. is already a mature market with a huge demand for large SUVs, while India is a fast growing market. In particular, India is a country that has huge demand for small cars. Therefore, we thought India could be the perfect place to investigate consumer reactions to small SUVs, like the Venue. Consequently, we made the decision to launch the Venue in India first of all.

How is the Venue received by consumers in India, the country where the car was launched earlier than in South Korea? 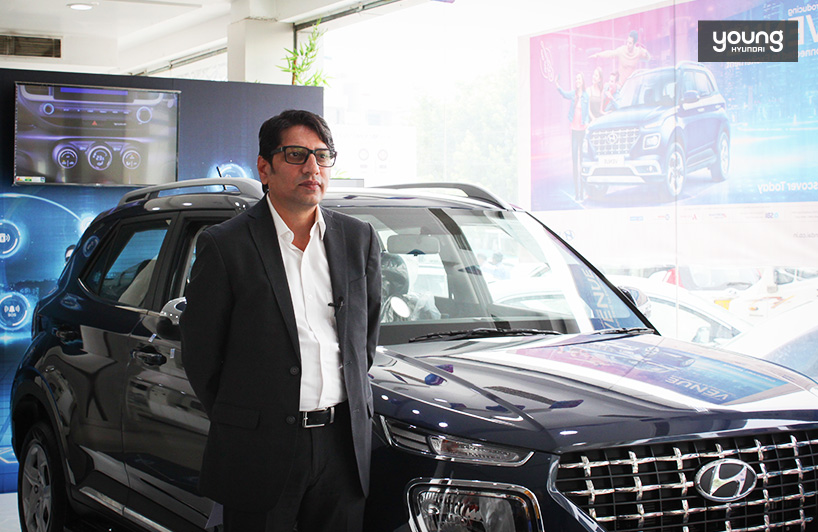 CEO Jasbir Singh of Sunrise Hyundai, a Hyundai Motor Company dealer in India
1. What are the age levels of people who come to see the Venue?
Most of them are the new generation, that’s to say, consumers aged between 25 and 30. If you were to ask me to be more specific, I’d say that the Venue is a car that’s very sought after by university students or graduate school students. Prospective buyers either visit our store by themselves or come with their families - their visits vary in many ways.
Some initially come to look at the i20, but they also show interest in the Venue. We found that some of our visitors are customers who already own competitor models like Maruti Suzuki’s Brezza and Mahindra’s XUV300.

2. The Venue offers a wide range of choices in terms of its engine lineup. What kind of engine is the bestseller and what are the most popular options?
The Venue comes with a 1.2L or a 1.0L Turbo GDi gasoline engine or a 1.4L CRDi diesel engine. Among the engine options, the 1.0L Turbo GDi gasoline engine sells the most. About 40% of all Venues sold are equipped with this 1.0L gasoline engine.
The car option chosen most by the consumers is the 7 speed DCT (Dual Clutch Transmission). When they purchase the Venue, they choose the S Package, which also includes a dual airbag, parking assist, a rear camera, and power windows for all seats. 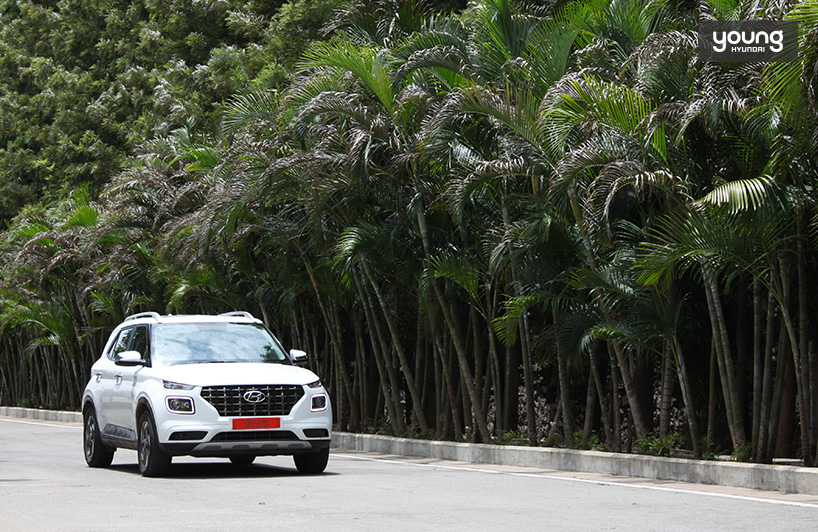 ▲ The Venue has been well received in the Indian market 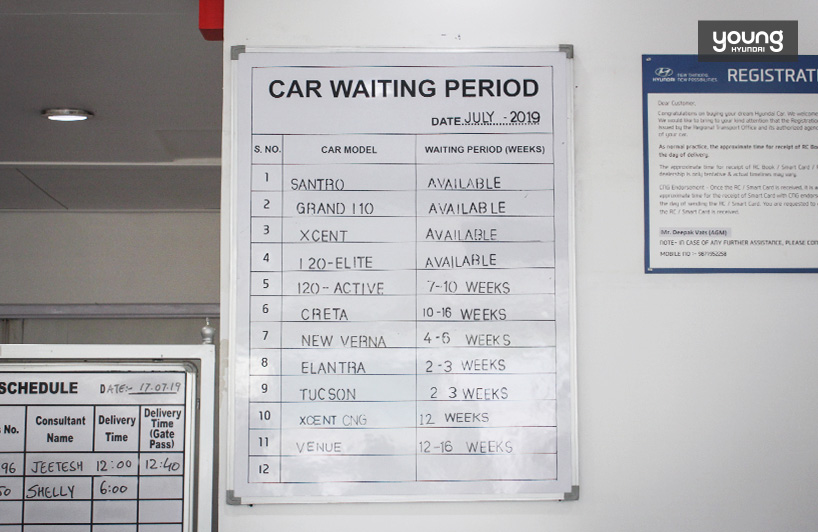 The waiting period for the Venue is the longest. As the most popular model, it takes over 3 months for a Venue to be delivered to its buyer. (The Venue occupies the lowest position in the table shown in the photo.)


A thorough and comprehensive local market research campaign preceded the development of the Venue model for the Indian market. Ultimately, we sold 50,000 units within 60 days of introducing the Venue in India, and it continues to remain a popular model. Presently, at Hyundai dealerships, the Venue has one of the longest waiting periods. Hyundai is doing very well in India, currently occupying the second largest market share. We look forward to seeing the Hyundai brand grow further in India on the strength of the Venue's popularity.