[3D: Double Vision] The past, present, and future of 3D: the Hyundai Project at LACMA

작성일 2019.02.08
When was the first time you experienced 3D art? James Cameron's film Avatar opened in 2009, as no doubt many of our readers saw it at the cinema. That was a decade ago, and in the meantime, not only were many 3D films released, 4D films were also released, and presently we are at the cusp of VR (virtual reality) and AR (augmented reality) becoming commonplace. Advancement in technology opened new dimension for art, and art in return was reimplemented into automobile and home appliance technologies, such as automobile dashboard HUD hologram, improving our quality of life. 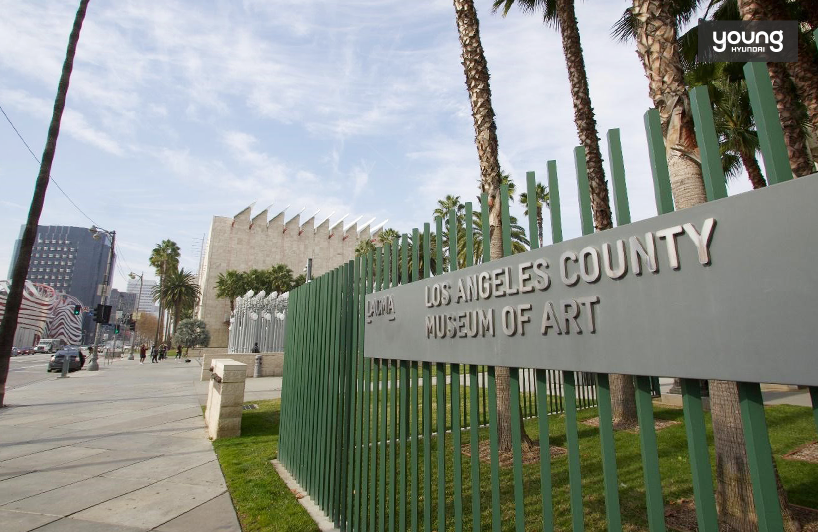 ▲ The Hyundai Project is open at LACMA


The etymology of art encompasses the meaning of technical skill. It was a great opportunity to gauge the significance of the Hyundai Motor Company and LACMA's 10-year art partnership entered in 2015.
This 2019, Young Hyundai journalists visited LACMA for a closer look at how art and technology were interrelated and growing together.

175 years of seeing with both eyes [3D: Double Vision] 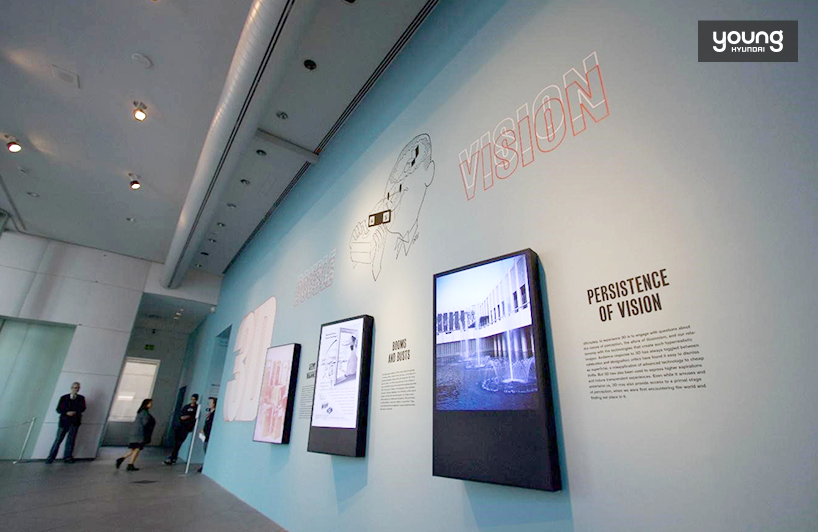 ▲ From the entrance, it is obvious that the exhibition is about active participation from visitors


When the Young Hyundai Journalists arrived at LACMA, the partnership's fourth exhibition, 3D: Double Vision was on. “Double vision” is another way of saying stereoscopy, or seeing with both eyes, a very basic principle of how we visualize things.
How do we actually perceive things in the third-dimension? Try this. Close your right eye and look at on object only with your left eye. Now do the opposite; close your left eye and gaze only with your right eye. The object surely did not move, but there is some perceived change in the location and even size of the object. This is a phenomenon caused by the distance between our two eyes. Our eyes perceive two separate but similar images from both eyes, then our brain combines the two images into a three-dimensional understanding.
3D: Double Vision project is an exhibition that highlights the 175-year history of how we became aware of and explored our perception of objects in the third dimension. The exhibition is a great opportunity to meet all the quintessential historical works in 3D film-making, VR, and AR. The exhibition hall presents a comprehensive collection of what's-what and who's-who of stereoscopy, more than 60 items spanning history from 19th to the 21st century. Despite over two centuries of history, it was interesting to see that people were exploring the same questions. 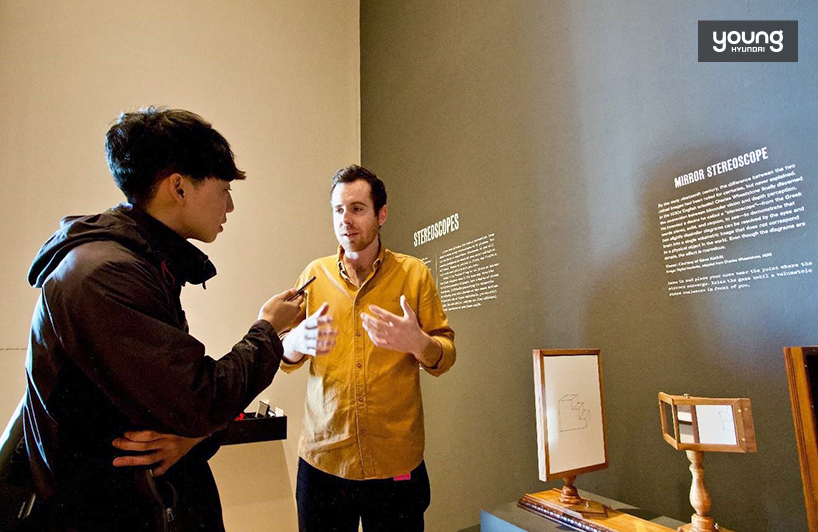 ▲ Nicholas Barlow, Curatorial Assistant at LACMA guided the team through the exhibited works


Nicholas Barlow, a curatorial assistant, helped the team better grasp on the exhibition. Nicholas kindly explained the three key works that helped us understand the overall ideas of the exhibition. Why don't we see what he had to share?

#Mirror Stereoscope, a pair of mirrors where it began 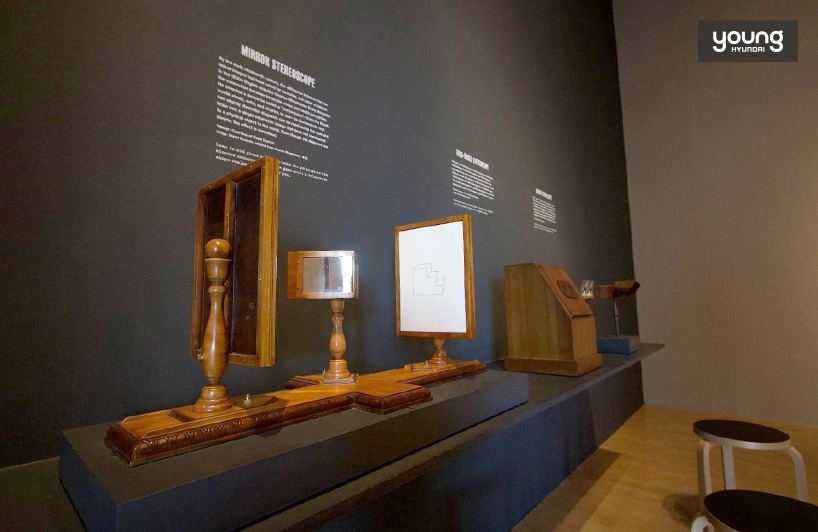 ▲ Charles Wheatstone's Mirror Stereoscope (1838) best illustrates the principles of 3D vision, and is considered the earliest form of 3D tech-art


Nicholas' first guidance was of Charles Wheatstone's Mirror Stereoscope, which was at the entrance of the exhibition. The wood and mirror contraption has a vague furniture-like appearance, but it is in fact art and invention from the 19th century. The Mirror Stereoscope is designed to view two minutely different images opposite each other via two angled mirrors positioned between the images, so the left eye and right eye perceive separate but similar images.
When used, the left eye saw only the image on the left through the mirror on the left, and vice versa. It was not immediately obvious, but after several blinks, the two-dimensional stairs suddenly popped out into the third-dimension.
“This phenomenon is called the illusion of depth. It's a simple-looking exhibit, but it conveys an illusion through the subtle difference between the two images on the left and the right, through accurately spaced and well-placed mirrors. Most importantly, it was the first step to understanding how our impression of solidity is gained by the combination in the mind of two separate pictures of an object taken by both of our eyes from different points of view."

#Platonic Solids, not everything that meets the eye 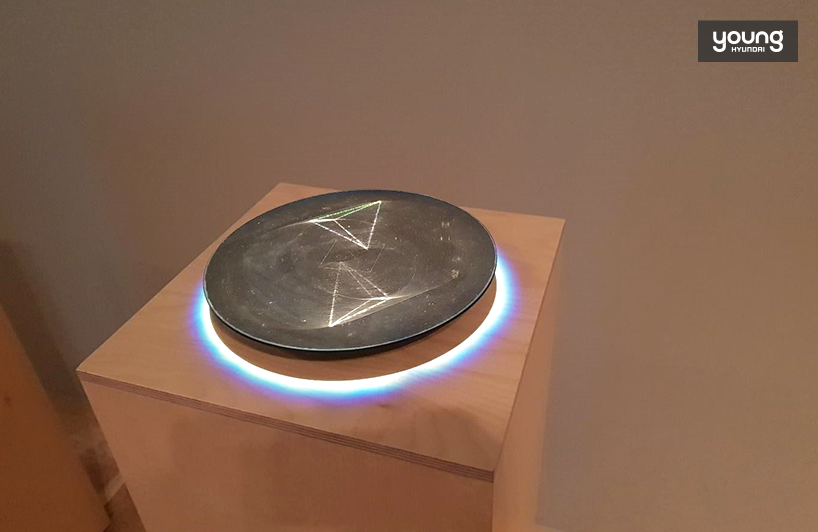 
Nicholas’s second guided destination was Tristan Duke's Platonic Solids. The holographic artist mostly works with optical sciences and visual perception. A hologram may be described as an illusion of depth-3D image activated by light. Platonic Solids creates an optical illusion through a reflection of an overhead light-source, creating an elaborate geometrical holograph floating over the rotating disk. Only when the viewer bend over for a closer observation from a shallow angle that it becomes apparent that there is no floating shape.
"An artwork like this piece is connected to conceptualism. It is about how we are in fact not looking at actual existing objects, but phantoms within our minds, illusions, and images of the virtual. In that sense, this piece combines modern art, optical technology, and cognitive science."
As the theme of three-dimensionality deals with our cognitive processes, artists are also well-versed in related fields such as optics, computer sciences, cognitive science, and analytical studies. Charles Wheatstone who created Mirror Stereoscope was for example, a scientist and an engineer, widely respected during his time as a man of breadth and depth of knowledge. The last artist that Nicholas introduced had quite the unique background. He told the team about the Hamiltons, the husband and wife who were a physician and spiritualists. 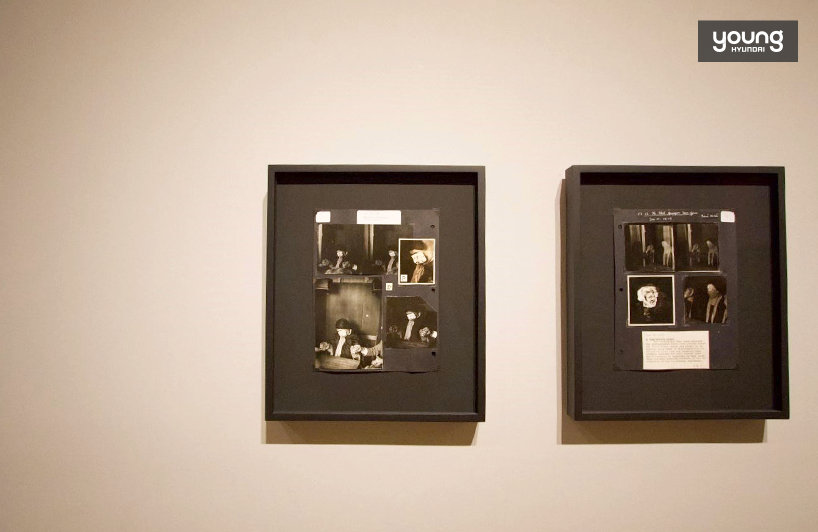 ▲ Stereoscopic Photography (1928~1933) by Mr. and Mrs. Hamilton utilized 3D photographic technology to “scientifically” prove the souls conjured back from the dead from their home


Honestly, their actions are unclear and rather bizarre. The Hamiltons sought to demonstrate the scientific credibility of conjuring the souls of the deceased by means of stereoscopic photography. The photos displayed here were taken during a seance, used to document their experiment.
At the end of the tour, Nicholas said that the bottom line of 3D: Double Vision was to share the 175-year story of people and their questions, explorations and challenges on the illusion of perceiving images on flat surfaces as three-dimensional images. This photo shows that 3D photography straddles both the artistic realm and the scientific realm of proof. Despite many of the presented works being completely experimental and even outrageous, they were meaningful in their challenge of the unknown. The tone of the exhibition revolved around being unafraid of challenges and exploring uncharted waters, and it was very much in touch with the Hyundai Motor Company's pioneering spirit.

What fundamental connections are there between art and technology? How did this project impact LACMA? 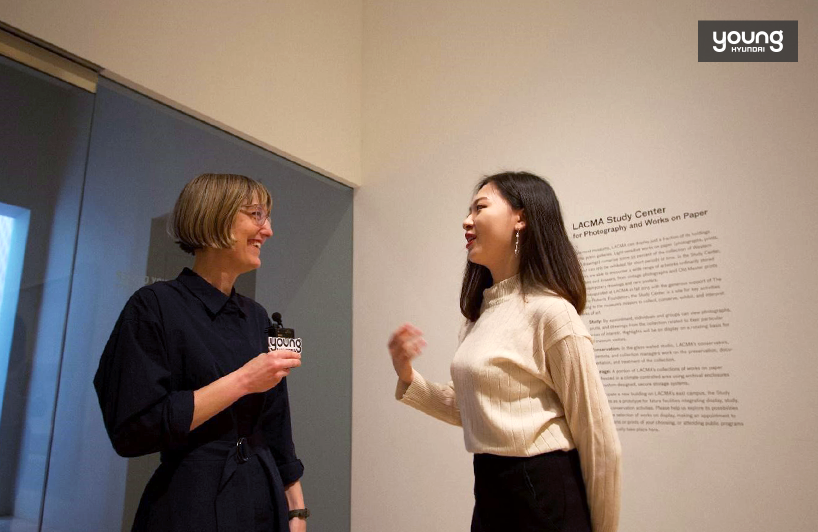 
"Art and Tech are always intertwined. Artists create upon a backdrop that is beyond reality, and tech-inclined people have a desire to create, so there is an important tangential point that the two can begin collaborating from. As a result, art and technology influence and change each other.”
Britt Salvesen, the exhibition curator of 3D: Double Vision was inspired to plan this exhibition when she saw the first 3D movie at the cinema. She shares that it was her curiosity if the 3D media and its history that drove her exhibition plan. 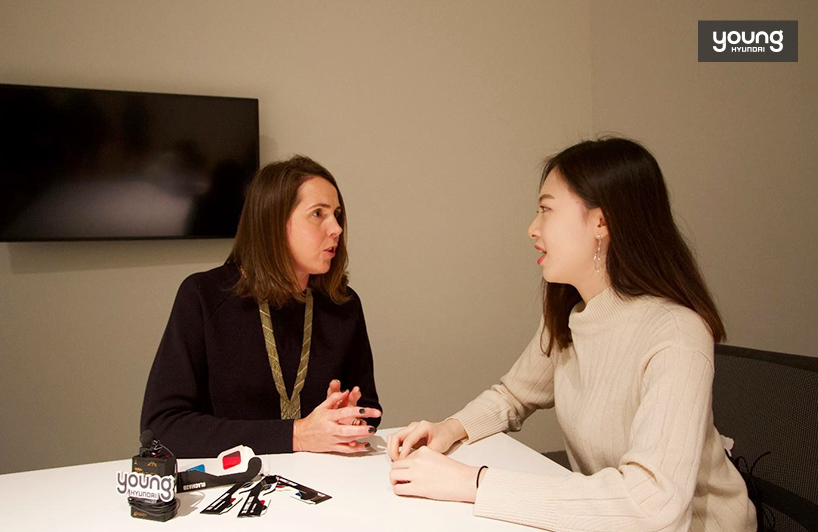 ▲ Katie Kennedy, the Associate VP of Corporate & Foundation Partnerships of LACMA is interviewed by the Young Hyundai journalists, on the outcomes and significance of the art partnership between Hyundai Motor Company and LACMA


Associate VP Katie Kennedy is in charge of the partnership with Hyundai Motor Company and oversaw this project which displayed the interrelationship between art and technology. She describes the collaborative project as an opportunity for LACMA.
"The Hyundai Project, our long-term cooperation project with Hyundai Motor Company, gave LACMA an opportunity to expand its thoughts and experiment with further-reaching ideas. LACMA is an NPO, so a decade of partnership with Hyundai Motor Company opens up a lot of new possibilities without the need to rely on revenue, to present innovative and challenging new ideas and presenting them in exhibitions. Through the partnership, we were able to show the public a whole new kind of art, unlike past exhibitions."
The VP also expressed her appreciation of Hyundai Motor Company sponsoring the Art + Technology Lab (A + T Lab).
A + T Lab is LACMA's innovation project to explore, study, and create new art forms through convergence of art and technology. The program reaches out to artists breaking new ground in the convergence of cutting-edge technology and art, such as in the fields of astrophysics, robotics, AI, 3D, AR, and VR. You might call it a new-artist incubator, as the program provides artists with space, funding, equipment, and so on. Hyundai Motor Company is actively involved in this program, through various support systems, including technical consultations. 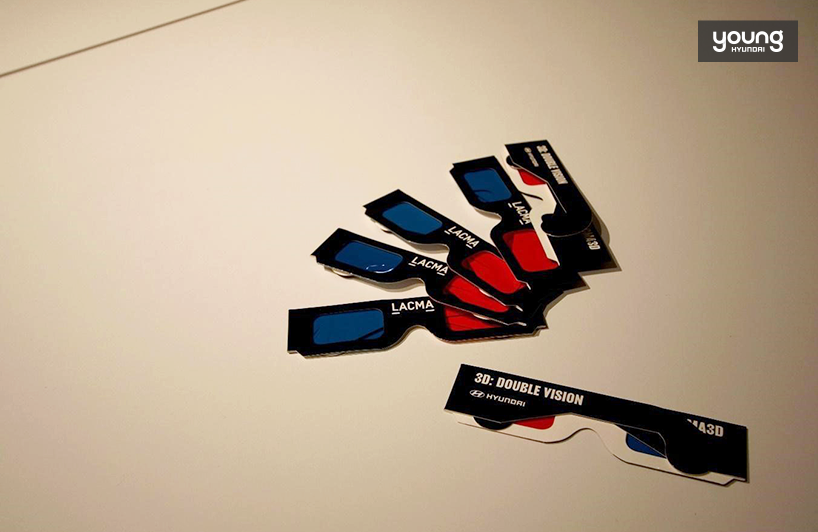 ▲ Visitors to LACMA are provided with complementary 3D glasses with a Hyundai Motor Company logo, when they come to the 3D Double Vision exhibition hall


Associate Vice President Kennedy showed us the 3D glasses with the Hyundai Motor Company logo and added: "This is the same pair of glasses given to and used by visitors. These glasses are a key component of the exhibition experience and having the Hyundai Motor Company logo on it is a clear message for the brand that the company is actively supporting culture and art. It's just great marketing."

Future-oriented experience for all - the Global Art Project 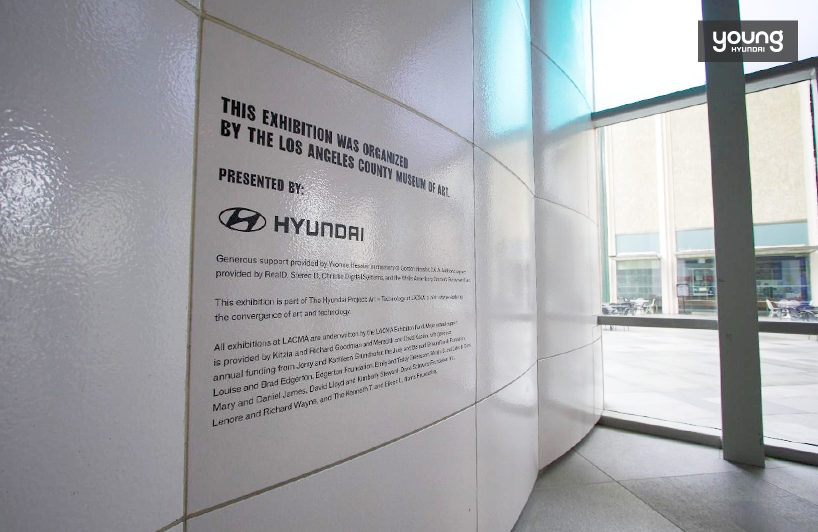 ▲ On the way out of the exhibition hall, we came across the wall text for The Hyundai Art Project: Art + Technology at LACMA


As the interviews came to an end, many of Hyundai Motor Company's art projects came to mind; even those that we were aware of before visiting the LACMA exhibition hall. Hyundai Motor Company is sponsoring the Korean MMCA for 10 years, the UK's Tate Modern for 11 years, and opened a Hyundai Motor Studio Project in Moscow and Beijing. What underlies all these genuine and earnest long-term sponsorship of the culture and arts sector?
'Hyundai Motor Company supports the creative activities the bridge cutting-edge new technologies. aspire to not only integrate the value of culture and art into automobile development and corporate governance, but also open a wide-spectrum discourse that delivers forward-looking experiences and values to our customers.'
Through this exhibition, we were able to finally get a good feel for one of Hyundai Motor Company's global art project. We look forward to seeing more from the forefront, where Hyundai Motor Company continues to bring together cutting-edge technology and art.
On a related note, Beyond Line: The Art of Korean Writing opens this summer, for LACMA's fifth and next The Hyundai Project. (http://www.lacma.org/art/exhibition/beyond-line) What insightful brilliance will the exhibition present of Korea's traditional art of calligraphy? 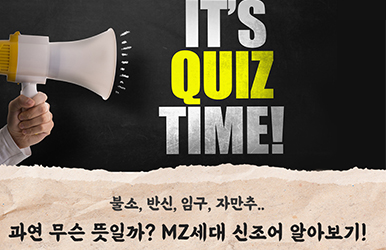